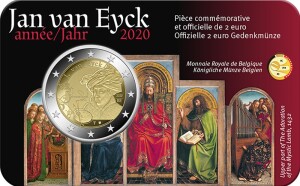 Jan van Eyck (before c. 1390 – 1441) was a Flemish painter active in Bruges. He is one of the early innovators of what became known as Early Netherlandish painting, and one of the most significant representatives of Early Northern Renaissance art. The surviving records of his early life indicate that he was born around 1380–1390, most likely in Maaseik (then Maaseyck, hence his name), in present day Belgium. 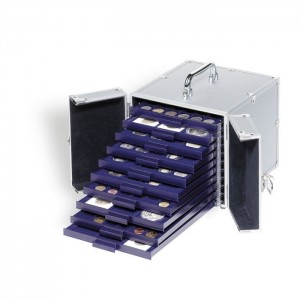 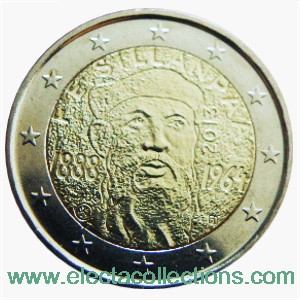 Frans Eemil Sillanpaa (1888 – 1964) was one of the most famous Finnish writers. He was awarded the Nobel Prize in Literature in 1939 for his deep understanding of his country’s peasantry and the exquisite art with which he has portrayed their way of life and their relationship with Nature. 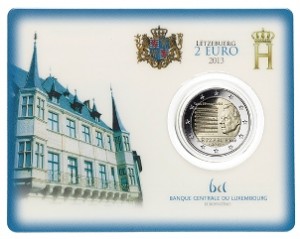 Commemorative 2 Euro coin 2013, dedicated to the National Anthem of the Grand Duchy of Luxembourg.

Monaco 2 euro commemorative coin 2013 commemorating the 20th anniversary of the admission to the United Nations, from 1993 to 2013.

The obverse of the coin depicts the world map and a dove carrying an olive branch, a symbol of peace since antiquity.

Commemorative coin 2 Euro issued to celebrate the 2400 anniversary of the foundation of Plato’s Academy.

The Athenian philosopher Plato (427-347 BC) was the most distinguished disciple of Socrates and the one most credited with preserving the Socratic teachings for posterity in his Dialogues. Upon his return to Athens from a first journey to Italy in 387 BC he founded a philosophical school in the area of Academia (today’s Kolonos, Athens) named after the local hero  Academos.

For nearly 1000 years  (until 529 AD), the Academy enjoyed a reputation for excellence, building on and renewing the teaching of its founder. The ideas of the Academy were transmitted to the Arab world, and from there to Medieval Europe. The word academy and its derivatives are used today in nearly all languages for notions associated with higher learning, the scholarly community and prestigious cultural institutions. 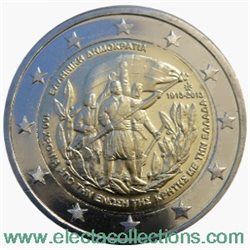 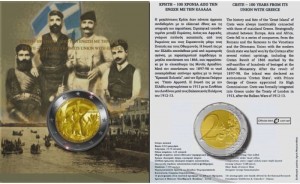 Greece – 2 Euro commemorative, 100th anniversary of the union of Crete with Greece, 2013 (in blister)

Commemorative coin 2 Euro issued to celebrate the 100th anniversary of the union of Crete with Greece.

The history and fate of the “Great Island” of Crete were always inextricably connected with those of mainland Greece. Strategically situated between Europe, Asia and Africa, Crete fell to a series of conquerors, from the Romans and the Saracens to the Venetians and the Ottomans.

Union with the modern Greek state was hard won by the Cretans after several violent uprisings, including the Cretan Revolt of 1866 marked by the self-sacrifice of hundreds of besieged at the Arcadi Monastery. After the revolt of 1897-98, the island was declared an autonomous ‘Cretan State’, with Prince George of Greece appointed its High Commissioner. Crete was formally integrated into Greece under the Treaty of London in 1913, after the Balkan Wars of 1912-13. 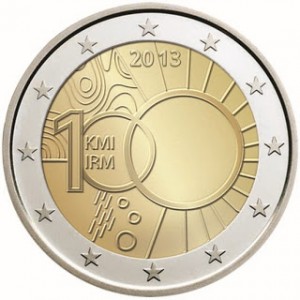 The obverse of the coin displays in its centre the number 100 with the first zero encircling the abbreviations ‘KMI’ and ‘IRM’ and the second zero representing a sun. Isobars, raindrops and snowflakes are depicted to the left of the sun. The year ‘2013’ is displayed in the upper rays of the sun and the nationality ‘BE’ is indicated in the lower rays.