GREEK CULTURE – ANCIENT GREEK TECHNOLOGY – THE ANTIKYTHERA MECHANISM. The Antikythera mechanism was recovered from a shipwreck found in 1900 by sponge divers off the island of Antikythera.

Built in Hellenistic times, this intricate device was used for astronomical calculations and has been described as the oldest analogue computer. Its more than 30 bronze gearwheels rotated pointers over different dials. Thus, manually selecting a date on the main dial – which represented the zodiac, as well as the solar and lunar years – shifted the smaller gears, so that the pointers on the other dials indicated the position of the selected date in the four-year cycle of the Panhellenic games (Olympia, Pythia, Isthmia, Nemea), the positions of the five then-known planets and the correlation with astronomy cycles that were of particular interest to the ancient Greeks.

The mechanism also predicted solar and lunar eclipses. Research on the mechanism, which has fascinated scholars for decades, is still ongoing under the Antikythera Mechanism Research Project, which, using advanced imaging technologies, continues to provide impressive new insights into the mechanism’s complex inner workings.

Commemorative coin 2 euro dedicated to the anniversary of 200 years since the introduction of the first Greek constitution.

From 20 December 1821 to 16 January 1822, the revolted Greeks held their first National Assembly at Nea Epidavros (known then as Piada), which adopted modern Greece’s first government charter, the Provisional Constitution of Greece.

The collection includes 22 coins from 18 countries of the euro zone area: 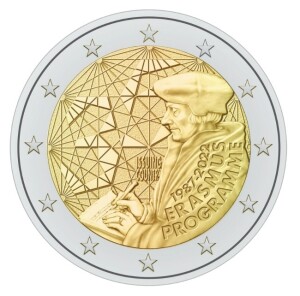